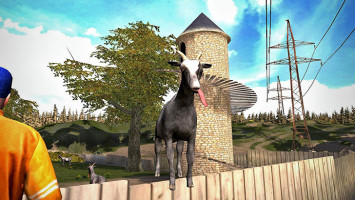 Goat Simulator is one of the main directions of the gaming industry. Usually, they compete with each other in realism and compliance with the real world. But with Goat Simulator, the situation is different - this game offers to put on the skin of a goat, devoid of the rules of decency and the instinct of self-preservation. Download Goat Simulator from the App Store or Google Play and enjoy simple gameplay!

A small town is at your disposal - a construction site, a couple of houses, a gas station, an office, a cornfield with obligatory circles, a local Stonehenge in the forest, a platform for demonic rituals in the mountains, a secret research laboratory, and so on. There is no super task here. You are a goat, so you can do whatever you want. It's hard to get from a goat and milk, so all that remains for you is to smash this cute town to smithereens and in half. As more damage is better. Entertain yourself by searching for all the trophies-figurines that open a variety of mutators or by completing all Steam achievements. To collect some prizes or get achievements, you will have to kill several tens of hours.

The gameplay is not easy to describe. After a sudden appearance on the map, without any explanation, like a real goat terminator, you need to crush and throw. The menu displays quests - to jump there and collect 20 gold trophies. The main task, as far as possible in such an aimless game, is to inflict damage on yourself and the inhabitants of the city.

Weird Graphics or Just Special Style of the Game? 4/5

Even a child can understand the interface of the application. Apparently, at the design stage, the developers have not yet reached the rich reserves of psychotropic substances. The start page welcomes you with a sightseeing tour of one of the game's locations - Goat City. After choosing the Play option and the location, the player is given the reins over the seemingly ordinary goat. And from this moment begins what should be described by the word madness. This is probably why it is impossible to criticize the game seriously. Yes, the graphics and management sometimes enrage with ill-conceived moments, golden trophies are placed in inaccessible places, animations go crazy.

Convenient Controls of the Goat Simulator

The picture is provided by Unreal Engine 3, physics - Nvidia PhysX, which has been seriously optimized. Draw range, not very good, but you'll be too busy mastering the controls to notice. But first, about the controls. There are several of them - a wheel for movement, as well as four functional virtual buttons. They cause the goat to fall, butt, burp, or grab objects with their sticky tongue. What for? For destruction, of course. Pay attention to the upper left corner - there are four important options hidden there.

Is this crazy? Yes, and his name is Goat Simulator. This is a playground on which the player is left to himself, but even a minimal imagination will allow him to have fun and get high with the enchanting improbability of the action that takes place on the screen. There is nothing more fun than the GS in this regard.